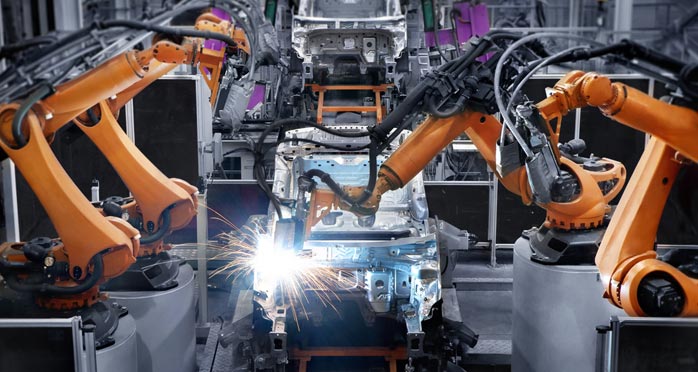 In the context of robot loading ‘machine tool’ now is taken to mean any machinery that is used in the production process. This is true for a wide variety of industries ranging from consumer goods to the transport and automotive industries. In many systems developed in other European countries, included as part of the ‘machine’ will be integral robot loading. The different justification schemes used in many EU countries means that due to their higher cost of labor it is not seen as economical to design the machine any other way. In the UK however, robot machine tending is not the norm. AMTRI is now spending most of its time developing specific robot solutions that fit particular UK production needs. As the investment in automation particularly robotics means that initial capital investment costs are greater than for a manual solution, the need to incorporate other production operations i.e. assembly, inspection, marking, etc in justification case for automation, is paramount. This said robot loading itself can improve utilization of the machine. As an example, AMTRI has recently completed a robot system design for a client that will improve productivity by 60 times over the manual process.

The need to improve productivity features high in any automation project. Labor is becoming very hard to find in many areas of the country and the use of a robot can often be the only way to increase productivity. This can mean attempting to load multiple machines with one robot so the initial outlay can be justified. A common pitfall of this specific approach is that it is hard if not impossible to retrofit to existing machinery which can mean automation has to wait until new machinery is purchased. A good example is a recent AMTRI design for a client who cannot be implemented successfully without first scrapping the existing machinery and starting again with a design for automation approach as the cost of retrofitting a suitable system onto the existing plant is prohibitive. Faced with this situation many companies have continued with existing equipment and postponed automation but increasingly this is no longer a viable option.

New robot designs however, are not just arm-like structures but parallel kinematic machines that can offer significant benefits in certain of these applications as can the use of fast linear technology. Advances in these fields give the opportunity to design novel solutions to specific problems. The ‘robot’ here is little more than an animated stick that can poke through the machine guard and release the component out of the protected zone for further processing.