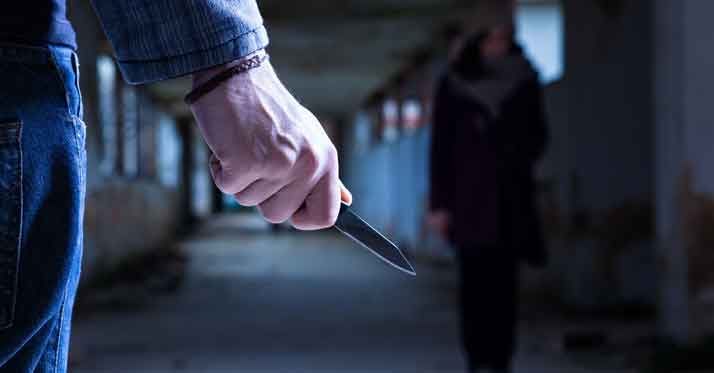 Not surprisingly, the topic of how young people in Britain (especially the inner city areas) should handle personal safety concerns, with the growing incidence of fatal stabbings, is raised with increasing frequency. It’s a really complex one to address from the perspective of the individual who is trying to protect himself/herself – or their loved ones – but I will try a New Age approach in this article which I hope teenagers (and their parents) will identify with and understand.

Yes, there is a larger social picture which needs to be addressed to stem the rising tide of knife violence (from a community perspective). The causes of this ‘epidemic’ need to be directly addressed for the betterment of the whole community. But many people are concerned with how to preserve life now, as things currently stand. The social solution cannot be effected overnight so the burning issue of personal safety remains in the meantime.

Before I enter this ‘prickly maze’ and start making suggestions on a topic of this importance and magnitude, it’s worth elaborating on a particular aspect of WHY? this is happening and what the significance of these reasons is (about the mindset associated with perpetrators and victims of knife crime).

A mass of statistics are constantly being published and manipulated in the media, with different explanations offered to suit different political agendas. As someone who has faced this sort of violence personally (and had to make personal choices about self defense based on being a teenager in such an environment) I have got a reasonable perspective on the sort of decision making processes which are occurring ‘on the ground’ – so to speak. These are just my opinion and my views, but I think having a working perspective on this makes it more obvious (and less hypothetical) how one needs to tackle the threat from one’s own personal viewpoint.

One perspective I do not hear being debated – or explained – in the media, but which is pertinent to explaining why this sudden turn to knife-related violence is actually occurring, is the question of “WHY are these youngsters and gangsters making the shift towards these vicious knife attacks in Britain – and not so much in other urbanised nations?”Why is it a local, British phenomenon?

A highly likely explanation of the recent shift towards knife crime is actually (purely my views, remember)because the police have been so effective with their Trident operation that they have made it very difficult for criminals and gangsters to access firearms. The reduction in gun crime, I believe, is a big reason for why thugs are turning to knives. Gun inflow to theUK was stemmed a while ago – and gun crime was then fuelled by a ‘pool’ of the same weapons being circulated around the criminal fraternity. This weapons pool was then decimated by removing the weapons from the streets – which briefly led to a spell of crimes relating to the conversion of replica guns to live ammunition (by a small number of criminal gangs). The replica converters were then rounded up too – and then the supply of weapons really ‘dried up,’ so to speak.

This then left only the commonly available household and related implements at the disposal of thugs. The problem with knives then became that anyone could get one. In the days of limited numbers of firearms it quickly became known within the community WHO? actually possessed a firearm. All and sundry were not in a position to respond (and get their own firearms) at this stage. So a ‘status quo’ was established – whereby those without weapons did not think they had a chance against the weapons carriers.

Confrontations were then less likely because the unarmed members of society took reasonable and simple measures to avoid violence breaking out with known, armed thugs. They naturally drifted towards instinctive measures of avoidance – and I believe therein lies the solution (even today). Implement natural avoidance measures – as you would against gun-wielding criminal threats.

Continuing with the Scenario Development:

Now that the almighty gun is no longer prevalent, everyone feels they have a genuine fighting chance against a knife-wielding threat by simply getting a bigger knife, Check more details here. Teenagers think they have a better chance of arming to the same level as the opponents they fear. This has led teenagers from the more vulnerable sections of society to arm themselves to try to match what they believe is the potential threat. It’s become a phenomenon of feeding the hysteria and building the tension – on both sides of the conflict (victims and perpetrators).

The easy access to knives has caused more of the vulnerable individuals/groups to arm themselves – making the threat of a violent confrontation much more likely and raising the level of tension artificially high, as a result.

Now don’t get me wrong, I am not implying that the bulk of teenagers are carrying weapons as a result – because they are not. However, because nobody is sure any more of who is likely to be armed (and who isn’t), the tensions are very high and the natural instinct to strike pre-emptively (yes, the pre-emptive strike is a natural instinct – developed for a good reason – survival) is being fuelled by this tension.

Thus, more of the susceptible groups have armed themselves and when they feel threatened in any way – or even intimidated – they hasten towards being ‘proactive’ and striking before the ‘enemy’ strikes them first. This is leading to an escalation of the frequency and intensity of violence, due to increased suspicion levels between teenagers – and is really symptomatic of a transfer in these societies from lower frequencies gun crime to higher frequencies of knife crime instead – which is a self-fuelling scourge on society and is, hence escalating far above the gun crime levels it’s replacing.

Back to the solution – planned, premeditated and effective avoidance measures (designed around pre-empting potential risks) will form the solution. By “avoidance” I don’t just mean staying indoors (although, in many cases, it does help to do so). I also mean:

I know this sort of guidance may sometimes appear to be an oversimplification of the situation – and in some cases it is (because even if you keep to yourself you may live in a community where the threat actually comes to you – even if you stay indoors all day). How do you deal with that scenario?

Moving in large groups will help. Moving during daylight hours whenever possible will also help. In addition, learning a martial art will be very handy (for 2 reasons):

As alluded to earlier, the fact that such violence is increasing is probably a result of people no longer knowing where the lines are drawn, because the definition of lethal weapons has been downgraded to a level where the majority now have access to them. Before this conundrum presented itself people were much more able to naturally take evasive action and stay safe. If we all disarm immediately (those of us with decency and the will to live) the armed thug will actually become less of a threat to us as individuals, because we will revert to addressing such threats in the same way we would deal with gun-wielding rogues. I don’t think anyone really needs instruction on how to do that, so I won’t attempt to give any….