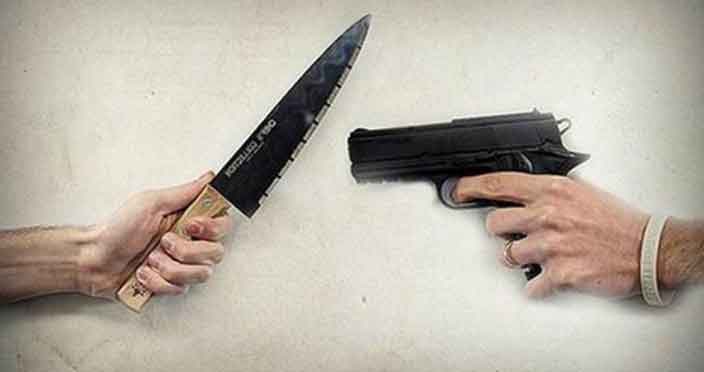 We’ve all heard that phrase in my title, right? “Don’t bring a knife to a gun fight?” Or more precisely for this treatise, don’t have a battle of wits with an unarmed person? Some folks just love to ignore these two admonitions.

My overview WAS NOT a threat of physical violence. It was a metaphor, which by the way, isn’t it awesomely stupid that when I use metaphor I have to then announce I used metaphor? I have to for the disclaimer value because those that wanna pick a fight with me will use any rationalization to try to win the day. What dolts!

Do any of you people read some of the tripe that rolls off your fingertips? I ask because in this realm of electronic goings-on there are a lot of punches thrown that do not connect. And the part that really slays me, is the puncher whose blow landed short will then be the loudest to scream foul when I counter punch and take them off their feet, again, speaking in metaphor and employing the writer’s tool of rhetorical statements, learn more here.

And yes, I am the one guilty of taking the bait, thus I end up having a battle of wits with an unarmed fool. Sorry friends – it’s my nature. I am a naturally pugnacious individual. Kind, respectful and considerate of all, but push me and I’ll cut ya three ways – long, deep and continuous – again, metaphor!

Do those that play this foolish game actually think they are winning the day with a little tantrum?

What these dolts lack is humility. Y’all have heard of that, right? It’s that, “Don’t throw stones if your house is made of glass.” “Judge not lest ye be judged.” And no, I am not arguing dissenting opinions are an issue. But when persons forget they are no more perfect than the one they attempt to defame, they truly show their colors.

For example, I once had a political dissenter show up on my article and basically state “The author left out an apostrophe, so if they do not know grammar, they are too stupid to be giving anyone else advice” or something to that effect.

So when I went to that person’s CP page imagine my delight when in their own bio they had one subject-verb disagreement and one misspelling, like the word “here” when they meant “hear.” And the person in question had a BA in Journalism!

Lemme see, lemme see . . . A professional journalist, or at least one with the sheepskin to imply professional, defames me, an amateur, yet they are no better than I? So isn’t that like Tom Brady dressing down an 8 year old pee wee football player for not being a pro? So Tom Brady throws two interceptions and then fusses at the amateur for throwing one interception? BS folks!

And the dissenter was not a working journalist. They got their BA in Journalism, but their bio listed no professional accomplishments. Their next statement in the bio was how 5 years later they got their JD to practice law. Hmmmm . . . what to make of that?

So if I can put together a scenario based on the evidence, the person in question graduated from college to be a journalist, yet it took the 5 years to complete a 3 year law degree? So either they were too inept to do a three year program in three years, or more likely, they tried journalism, failed, flopped, or whatever, then went to law school after two years in journalistic limbo.

By the way, what I just typed I said to them openly, and they did not deny it, so more than likely, they were a failed journalist who joined AP to throw their weight around to impress we amateurs (yes, I know AP has many successful professional journalists who produce here). What an ass.

That would be like me defaming new motorcycle riders for their lack of experience. I mean, I have been riding big man motorsickles since 1978, so should I try and punk the newbies when compared to my 31 years in the saddle? Only a lame assed punk would engage in such, and I am plenty of things, but lame assed punk ain’t one of ’em! What was the point to all this? Just to try and once again remind some who need it that no one is above learning something new every single day – no one! And just when you think you have the world by the short hairs, someone, hopefully me, will come along and smack ya back to reality. Remind you that you ain’t all that and a bag of chips.

I have zero illusions as to my greatness and impact upon this rock. I will live and die and no one will give a rat’s ass except my loved ones, and I’m just fine with that! Some of you need to take a lesson in humility from me.

And that’s what’s coming next in Whiplash’s catalog. I will delve into the concepts of humility, false-humility and boasting. Let’s just separate the men from the boys, or the women form the girls. I have spent my life observing and chronicling what I see and hear. It is indeed amazing how if one catalogs, files and ruminates about what they see around them, so much can be learned. Sometimes the school of hardknocks is a damn fine university.

And when we add my PHd. from the school of hardknocks and my formal BA I indeed have plenty to ruminate upon. Stay tuned. Whiplash is just getting started. (Don’t y’all love it when I go all “third person” on ya?)

Don’t Bring a Knife to a Gun Fight; Or, Having a Battle of Wits with an Unarmed Person